A couple of months back I got a text from my brother. ‘Are you the one who mentioned that you like the author Chris Brookmyre?’

‘Yes,’ I replied, ‘he’s my favourite author and I’ve read all of his books, why do you ask?’

‘He’s appearing in the Literature Festival in the town where I live.’

Now I’m not 100% sure if this constituted an invite but a quick check online, delight that Barry Cryer was also appearing, and I had booked a ticket for the whole weekend. I was going on a road trip, I was going to the Ampthill LitFest.

As far as road trips go, Sunderland to Ampthill isn’t that exciting. Four hours of tedium on the M1 broken up by the bright lights of Woodhall Services. (I did see a woman knock her husband over at Woodhall on the way home but that’s a story for another time.)

I drove down on Friday, convincing myself that as I am now a full time writer, driving to a Literature Festival was definitely work.

As excited as I was about the festival, the highlight of the weekend was always going to be seeing my five year old niece. She seemed equally excited, especially with my relatively new career. “Will Uncle Alan be famous when he dies?” being my favourite question of the weekend.

The festival itself was held at Redborne Upper School in Ampthill and was split into workshops, panel discussions and headline acts. The workshops on Saturday were Ink It and Pitch the Professionals. As I was combining the festival with visiting family I decided not to attend the workshops but later in the day I began to regret it. Working with the likes of Mark Billingham is an opportunity too good to miss but I missed it. Lesson learned but I did turn up in time for the award ceremony and it appeared to have been a very popular and rewarding session.

Pitching the Professionals was a workshop that I probably needed to attend but I swerved it. Feedback from those that did attend was very positive and seeing the guests on the panel later, I understood why.

The first panel discussion I attended (in the excellent auditorium) was New Authors Breaking Through starring authors Tracy Buchanan and Stephen Bywater, Matthew Smith from Urbane Publishing and agent Lisa Eveleigh. There was some excellent advice. I was taking notes on my phone but it looked very much like texting so felt guilty and I may have forgotten some. Holmeside Writers, the writing group I attend in Sunderland has definitely benefited from the notes I did make.

Each guest offered a slightly different take on the subject but there were common themes throughout the weekend. There are many ways to get published and if your novel is good enough, it will find its place but you absolutely have to make it the best it can be before submitting it. Get as much honest feedback as you can, do your research on who you are submitting to and how they like submissions to be formatted. The first paragraph is crucial. Get used to rejection, you’ll get a lot of it. It may sound like common sense but to hear it from the professionals was really useful.

There was a Q&A session afterwards but any questions I had prepared had been covered in the discussion itself. I nipped out afterwards just in time to see the beer tent blow away and made do with a coffee and a lovely chocolate brownie.

Next up was Crime Writers: The Insiders. Husband and wife writing team Robert and Carol Bridgestock and writing partnership AD Garrett (Margaret Murphy and Helen Pepper) were the guests. Moderator Simon Michael’s added to the mix and between them they had well over 100 years of experience in the world of crime (from the right side of the law!)

Whilst the crime stuff was fascinating, what really interested me was the idea of writing teams. I’d never considered it before and, as a miserable bugger, I doubt very much I will ever be part of one but they found a way of making them work. Making the procedural and the emotional come together, understanding whether forensics would support the plot the writer had come up with etc. It makes perfect sense that one person would probably not be able to do it on their own but they gave some really good insights.

A quick break and it was time for the bit I was really looking forward to, British Crime Writers. I’ve already mentioned my love of Chris Brookmyre’s work but I’ve never heard him speak. He didn’t disappoint. Moderated brilliantly by Mark Billingham, he was joined by Martyn Waites (Tania Carver) and Hugh Fraser.

Each panellist was witty, knowledgable and, possibly a little surprisingly, very humble. They are all very successful but have worked hard to get where they are and realise how lucky they are. Hugh Fraser possibly seemed like the odd one out being mainly known as an actor but he fitted in perfectly with the rest of them for an hilarious session.

Quote of the day went to Brookmyre when talking about his first three novels that went unpublished “The publishing industry is fundamentally prejudiced against books that are shite.”

Once again there was a Q&A session, with some potentially tricky and I would say rather rude questions handled brilliantly by the panel. 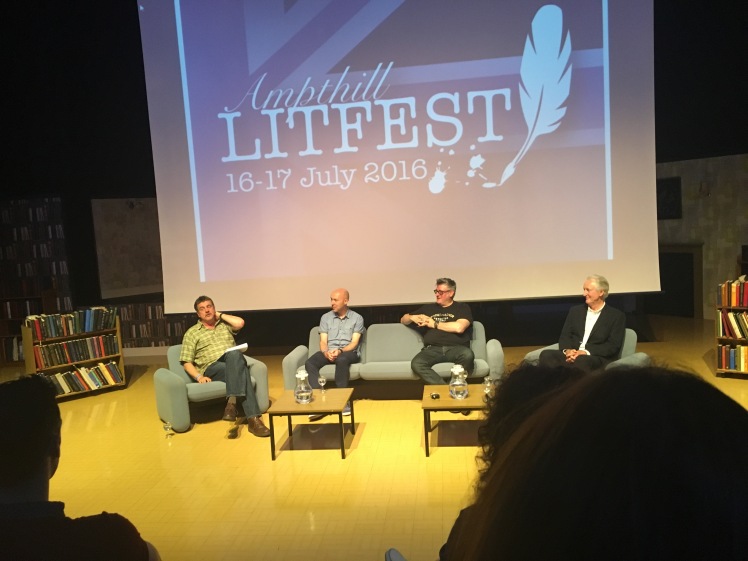 My brother then joined me for a couple pints of lovely Ampthill Brewhouse Golden Ale and we were off to see the headliners.

I’ll admit that I didn’t know much about Francesa Martinez beforehand other than she was a comedian and she had Cerebral Palsy. As you would expect, she was very funny but she was also passionate and political and made me think of things slightly differently. Recently I wrote a blog called Don’t be a dick basically trying to tell people to stop being horrible to each other. I found myself listening to Francesca and realising that she was saying what I wanted to say but much more eloquently. She put it in the context of people being conditioned to be unhappy to aid consumerism and it made perfect sense. If you get the opportunity to see her, go, you won’t be disappointed.

Anybody with the slightest interest in comedy over the last fifty or sixty years will know of Barry Cryer. He has worked with everyone and he is one of the most respected men in the business. He had story after story, joke after joke (the parrot ones were brilliant) and similar to early guests, despite his immense talent, he was very humble. A lesson to us all, brilliant stuff.

Sunday was more of the same. Whilst a couple of sessions on TV screenwriting were unfortunately cancelled due to unforeseen circumstances, this gave me the opportunity to spend more time with my niece who was now telling bemused waiters about her uncle who was a writer.

The Script to Screen Feature Film session was chaired by Simon Bosanquet and starred Graham Baker, Eugene McGing and Leon Butler. For someone who thought he wasn’t taking notes I have certainly shared a lot with my writing friends. More great advice with similar themes to the Saturday. A good script will get picked up but you have to make it as good as you can.

Last up was Steven Berkoff, funny, knowledgeable, engaging, occasionally controversial and certainly opinionated, the crowd lapped it up. It was a great end to the weekend.

I thoroughly enjoyed myself and I can’t end this blog without noting the huge amount of work it takes to put on one of these festivals. The organisers looked stressed throughout and I really hope they took some time to enjoy it as much as I did.

I will be appearing in the Sunderland Literature Festival in October and I hope I can be half as good as some of the guests this weekend.

One thought on “Ampthill LitFest 2016”