In part two of my cycling blog we’re going to look at a cyclist that we are all familiar with. A cyclist that most of you would expect me to write about in one of my blogs and the one a lot of you identify with most even if you don’t want to admit it. The Fanatic.

The cycling fanatic comes in all shapes and sizes. Some of those sizes don’t lend themselves to wearing Lycra but that won’t stop The Fanatic from squeezing into some hot pants and screaming at the telly whenever the Tour De France is on.

To The Fanatic, cycling is not a means of transportation, it is not a hobby or a sport, it’s not even a way of life. It is life.

Everything leads up to the next fix. They’ll think nothing of getting up at five in the morning to embark on a 100km ride into the countryside. Not because they need to get somewhere. Not because they’ve inadvertently left a child in a holiday cottage in the Dales. They do it for fun. Imagine that.

Weather is not an issue. They are wearing what is basically a gaudy, skimpy frogman’s outfit so the rain won’t have an impact. The only way you will know if they have been out in bad weather is when the peak of their cap pops up like Norman Wisdom’s after riding into a headwind.

As a football fan may don his favourite team’s replica shirt whilst playing 5 a side on a Tuesday lunchtime, the cycling fanatic will happily advertise Sky TV, Cannondale or some obscure Italian drugs company (probably). Whilst peddling up a steep hill, most of them dream of being Bradley Wiggins (below) or Neil Armstrong, that American rider nobody mentions anymore.

The Fanatic’s dream is to go and see the Tour De France. Ideally they would like to be in full kit, running in the middle of the road holding a selfie stick whilst the riders have to swerve to avoid them. The riders, fully appreciative of this support, have taken to giving them a quick smack around the chops as a thank you.

After watching Le Tour, the fanatic will inevitably try and recreate it by riding part of the course whilst doing his own commentary. After part of Le Tour was held in Yorkshire in 2014 this has now spread to the UK and there’s nothing I like more than two cyclists, side by side discussing how privileged the three miles of traffic behind them is to be on the course. The police have now issued guidance to motorists as to how far away they need to be from The Fanatic to stay out of earshot and avoid the risk of falling asleep at the wheel. 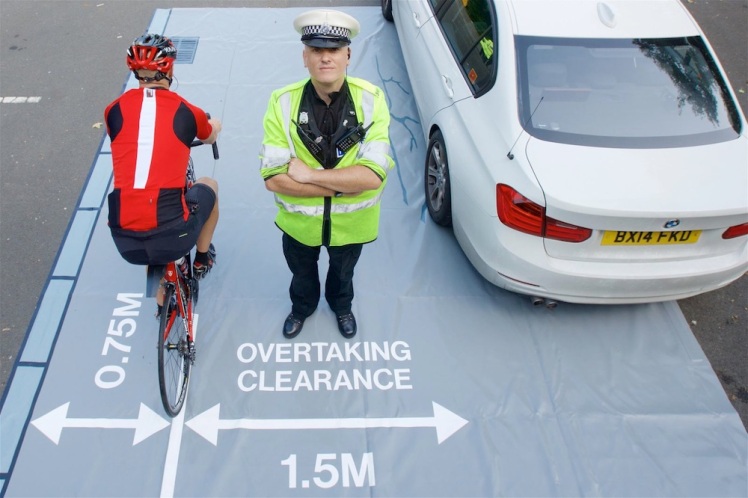 At heart The Fanatic is an attention seeker, the peacock of the road. If they weren’t wearing their spandex on two wheels they would be appearing on the X Factor or have their own Timmy Mallet tribute act. Ultimately harmless but a bit irritating if you ever come into contact.

Popularity: 6/10 Form the heart of the cycling community but largely disliked by normal people.

Skill: 7/10 Can’t be denied that the majority of them know how to peddle.

Top skill: Getting in the way. Whether being a spectator at a big race or riding a country road, The Fanatic is almost impossible to pass.

Style: 4/10 A generous mark due to the effort they put in but still an absolute clip.

After reading this it may come a surprise that the fanatic isn’t always a singleton. Sometimes they are even married. The Fanatic’s spouse forms a large proportion of the next category I will cover. The Reluctant Cyclist.

2 thoughts on “The Fanatic. (Part two of my guide to cycling.)”