Now that you own a car and are out on the big bad roads, it’s time for a crash course in driving etiquette.

There are many categories of drivers, some more welcome than others. I will try and highlight a few major car driving breeds, see if you recognise yourself.

In June 2015, three pensioners spent a total of 16 hours sat at a mini roundabout in Tunbridge Wells. They arrived at exactly the same time, none of them knowing who had right of way. 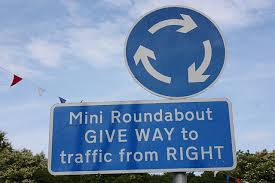 Nobody likes a Ditherer. Admittedly you may have to make another decision very quickly and stick to that if you are going to smash into the back of a bus but a bad decision is better than no decision at all.

The more technology a car has the easier it is to dither. Sat Navs, air conditioning, even electric windows can become a distraction to the feeble minded. A cassette player in a Rover 75 is as lethal as a machine gun in the hands of a chimpanzee.

Harsher punishments were recently brought in for people caught using their mobile phones at the wheel. A welcome ruling that wasn’t, as most people thought, brought in to prevent accidents but to prevent dithering. If someone is wondering whether to ‘like’ or ‘react’ to a post on Facebook, they’ll not notice that it is their turn to cut up a cyclist at the lights.

Only last week I noticed a bloke sat in his car outside a primary school, messing with the camera on his phone and trying to retrieve something that he had dropped down his pants. The ultimate Ditherer.

Actually, on second thoughts, has anybody got the number for the police?

This blog is mainly aimed at the UK market but if there are any Americans reading, welcome, you may want to skip this bit.

The Wannabe American is not, as you would expect, someone driving around like they are in the Dukes of Hazard, beeping at young ladies in bikini tops and getting into scrapes with men called Boss. It is someone who tries to recreate the American dream in Oldham by being morbidly obese and driving to the corner shop that is a two minute waddle away.

They see their car as a giant mobility scooter and they will happily abandon it on double yellows, pavements or someone’s garden if it gets them a few feet closer to their destination.

The interior of the car is always yellow, a result of years of smoking Benson and Hedges. They can usually be identified by American style bumper stickers, or window stickers proclaiming how much they love their Yorkshire Terrier.

If you spot one, approach with caution. They are likely to pull out without indicating, attempt u turns in one way streets and drive only using their belly whilst opening a box of tabs and eating a Ginsters pasty.

They are one of the most unlikeable breeds of car driver but have some pity on them, they suffer chafing in places you didn’t even know you had.

Next time we will cover more loveable and not so loveable rogues of the road. If there is a particular type you would like me to cover, let me know in the comments.

One thought on “The Ditherer and the Wannabe American. My guide to driving etiqeutte”