I’m not ashamed to admit that I’m lazy. Most people are. Why choose the difficult path when there are far easier options available?

I see people climbing mountains, trekking across deserts or rowing across the Atlantic and despite having some admiration for the effort, my overriding feeling is why bother?

When people used to tell me they were running the Great North Run, I couldn’t understand it. Imagine running for thirteen miles and discovering you’d ended up in South Shields, that’s my idea of hell.

My mate Thomma used to run the Great North Run every year. He was competitive, one year he even claimed his bad time in the GNR was down to him running it with a broken leg. He had an excuse for everything.

I never saw the point in running, a lot of effort for no reward. I was never going to be a runner.

And then Thomma became ill.

At first it was seen as ‘Typical Thomma’. Despite being annoyingly good looking, charming, funny, a good footballer and very popular with the ladies, he was also a bit of a Frank Spencer. There was always a disaster just around the corner. He would set fire to himself whilst changing a car battery, go to a job interview with the cardboard from his new shirt still under the collar or send a gossipy email about a senior manager having an affair directly to the senior manager in question.

He made us laugh and that is why he was such a good mate.

To hear that he’d been out running whilst contracting in Scotland and then ended up in hospital with chest pains was just ‘Typical Thomma’. He was the fittest lad we knew, he couldn’t be unwell, this was just the latest in a long line of calamities.

But he was unwell, very unwell.

He was diagnosed as having Giant Cell Myocarditis, a very rare heart condition.

I don’t think we grasped the enormity of it until he announced that he needed a heart transplant. Even then, we knew he was in one of the best heart hospitals in the world. We’d all seen news stories about people leading full lives after heart transplants, even people running the Great North Run. Thomma was going to get better.

The lads arranged a trip up to Scotland to see him. Armed with presents and good intentions, we set off on a mission to cheer him up.

As with all good mates, our relationship is based on taking the piss out of each other and we had plenty of joke presents and amusing tales to regale him with.

That’s when it hit us.

I’m not a religious man and don’t believe in praying but at that moment I would have said anything to make my mate better.

I’m not sure why but I blurted out “I’ll run the Great North Run with you.”

The other lads mocked.

“You’ll never run the Great North Run,” they said. And I sort of knew they were right. But I’d promised.

I’m no Legal Eagle but my mate’s wife is and apparently I’d made a verbal contract.

I’m a stubborn man and there’s no way I was going to do the Great North Run but the lads kept on at me and we came to a compromise. I would do the Sunderland 10k in 2013.

I hated every minute of training and couldn’t see why people enjoyed running. On race day I finally got it and despite crossing the line in just over an hour, I felt a massive sense of achievement.

My mate who ran the coast to coast was on the finish line to cheer me on but also to remind me that the fact that I could wave whilst crossing the line meant I hadn’t tried hard enough.

Fast forward a year and I was doing the Sunderland Half Marathon. My training had gone well and I was enjoying running.

On race day I set off like Mo Farah.

I’d gone off too quick and the last eleven miles crushed me. At least I got acceptance that I’d tried hard enough when I couldn’t even hear my mates screaming encouragement at the finish line never mind wave to them. 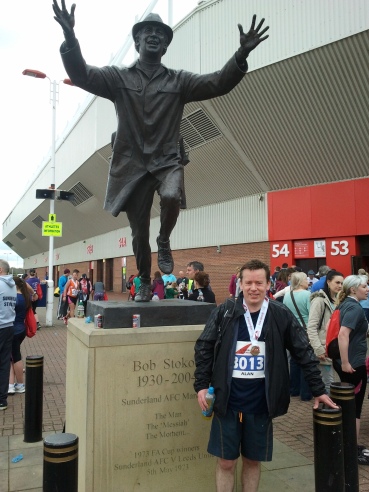 But I’d caught the running bug and as soon as entries were out, I was signed up for the next one.

Then I had my own series of Thomma style calamities including my own stay in hospital when my stomach exploded and I lost a few pints of blood.

I had a number of false starts and never managed to get back into running, my stomach and my legs betraying me every time.

Then I stupidly made another promise, this time whilst drunk. I promised a friend that I would run the GNR with her.

I’ve put the training miles in but I’ve been running with a dodgy right knee. When that eventually got sorted, my left one went. I’m going to be running the GNR wearing two knee supports and looking like Forrest Gump.

I’m not going to break any records or even my own personal best but I will get round.

And because I promised.

I would be grateful if you could spare a couple of quid to sponsor me in aid of Thomma’s charity. It will prevent me from having any excuses and won’t allow me to be lazy and think about dropping out or walking any of it.

2 thoughts on “From lazy to legging it. (Why I’m running the Great North Run)”