My relationship with organised runs has been a little bit cursed.

My inspiration for running was my mate Thomma who has always had a touch of Frank Spencer about him and I can’t help but think he’s had a hand in my running mishaps to date. I explained my reasons behind taking up running in my blog last year and I’m glad he inspired me to get involved but it can be bloody frustrating sometimes.

My first, and I assumed my last, organised run was the Sunderland 10k in 2013. I hadn’t enjoyed the training but had raised a lot of money for Thomma’s charity so was determined to complete it. I plodded round, sporting a Leg It t shirt and ridiculous bum bag creation, bumped into a mate and finally started to understand what people enjoyed about running. 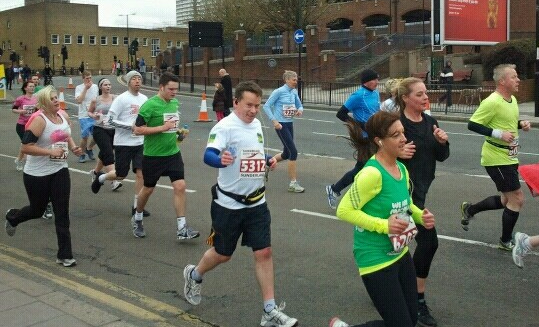 I was slow but I finished and thought that maybe, just maybe, it wasn’t quite as bad as I’d thought.

I decided that in 2014 I’d have a bash at the Sunderland Half Marathon and would give it a good go. I trained well and always aimed for a time of around 2:10 but a couple of weeks before I did a 12 mile training run at two hour pace and filled myself with false confidence.

On the day I went off like an idiot and the first two miles were the fastest ones I’d ever done, the other eleven made me pay for them. I was knackered and the last three miles were a real slog but I finished in just over 2:06 so I was happy and I was ready to go again in 2015. That’s when things started to go wrong. 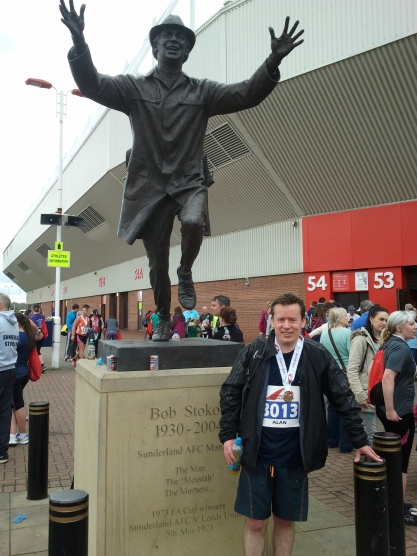 I started my training early and was doing ten mile runs in February ahead of the half marathon in May. I was well on course and maybe I could aim for that elusive two hours. And then I collapsed on the way to work.

Nothing to do with running, nothing to do with anything as far as I could make out but I lost a lot of blood and spent best part of a week in hospital. I went from running ten miles to not being able to walk a mile. There were still a couple of months until the run and I had vague hopes of getting fit but it was never going to happen. I bailed out and planned for 2016.

I signed up again and started my training, gradually building my fitness up but then I got a niggling knee injury. I tried various knee supports but it wouldn’t go away and, at the risk of becoming a bit of a sicknote, I admitted defeat once again.

In 2017 I decided not to curse myself by signing up and just trained towards the run with the intention of signing up at the last minute. Once again my knee scuppered my chances and I had to take a break.

At this stage I’d already committed to the Great North Run, something I said I would never do and I was already getting sponsorship. I bought an exercise bike to keep me going until my knee was better and eventually got back out on the road again. Training wasn’t great but with the aid of yet another knee support, I got out and completed the run. I hated every minute of it and vowed never to do it again but at least I had completed another half marathon.

Which brings us to 2018. I signed up for the Sunderland Half once again and was determined to train properly and give myself the best chance possible. The beauty of living in Sunderland is that we have a fantastic coastline and it is great to run along. Unfortunately it isn’t the hilliest of routes and as I found out to my cost at the Great North Run, I needed more hills in my training.

The start of my training was delayed due to first a heavy cold over Christmas that wouldn’t shift, including a two month headache that the doctor ‘hoped would go away’. Then the Beast From The East came to slow me down. I don’t mind running in snow, quite enjoy it in fact, but I can’t run on ice.

That eventually cleared and I was back on track. I had a training schedule and was sticking to it. Four or five runs a week, one of which I accepted would be a duff one and the rest where I tried to break a record for the year whether the farthest distance, fastest 5k, fastest mile etc.

Every run I did was on a hilly route so whilst I was slow, I knew it was doing me good and I had a good warm up routine which seemed to be keeping the knee problems at bay.

I had a ten mile run scheduled and as a confidence booster, I decided to return to my coastal route. I completed it without stopping and whilst I wasn’t fast, I was slightly ahead of where I was for the GNR the previous year.

I did my fastest 5k of the year the Monday after that and my next planned run was a five miler. I went out feeling fine but something wasn’t quite right, I wasn’t in pain, didn’t feel out of breath but just felt a bit odd. I would normally try and run through it but gave up after a mile and went home.

I rested for a couple of days and on Friday (the 13th!) was my birthday.

I’d decided to have a break from drinking to give me the best chance of training so hadn’t drunk anything since Christmas. I went to see a play in a pub on the night and was mocked for drinking Diet Coke but I had a ten mile run planned for the morning.

When I got up the next day my left foot was horribly swollen and I was in agony. I’d felt a little bit of pain the night before but had no idea what had caused the injury.

I did the usual of ice and raising my foot but the pain was terrible. My enthusiasm for the delivery of my new running shoes, a birthday treat, wasn’t there as I hobbled towards the door.

By Sunday, after a night of no sleep and even worse pain I headed, by taxi, the half mile to the walk in centre to get checked out. They didn’t think anything was broken but weren’t one hundred percent sure what it was. They gave me Codeine for the pain and told me to rest for a week and if it didn’t improve, to go to the doctor’s.

It deteriorated during the week so I booked myself in for Monday morning. The doctor took one look and decided it was gout.

If you don’t like pictures of ugly feet, look away now!

Bit of a surprise as I’d hardly been living like King HenryVIII but she prescribed some tablets that should shift it in a couple of days. She also warned of ‘loose stools’ as a side effect of the medication.

Codeine bungs you up so the impact was delayed but when it came it was horrific. I will say no more on the subject.

I still had vague notions of picking up my training once the gout had gone but ‘a couple of days’ became a week and whilst the pain and swelling has subsided considerably, I still can’t get my running shoes on and I’ve only just begun walking again.

So, after missing three weeks of training and still not being able to run with less than two weeks to go, I’ve had to drop out once again.

It’s fair to say that I am gutted, probably more so than with the other times I’ve had to give up. I was really looking forward to it because the Sunderland Half Marathon is everything that the GNR isn’t. What’s more, the finish line is ten minute’s walk from my house and I’d already made arrangements for my first pint of the year.

Once I’m back on my feet properly I’m going to aim for something else this year, maybe the Durham or Gateshead 10k (but not the GNR!) and fingers crossed, avoiding any Frank Spencer type mishaps, I’ll finally get to complete the Sunderland Half Marathon again in 2019.

One thought on “Time is running gout. (My love hate relationship with running)”